Woman with a Child (Nude Figure and Cupid) 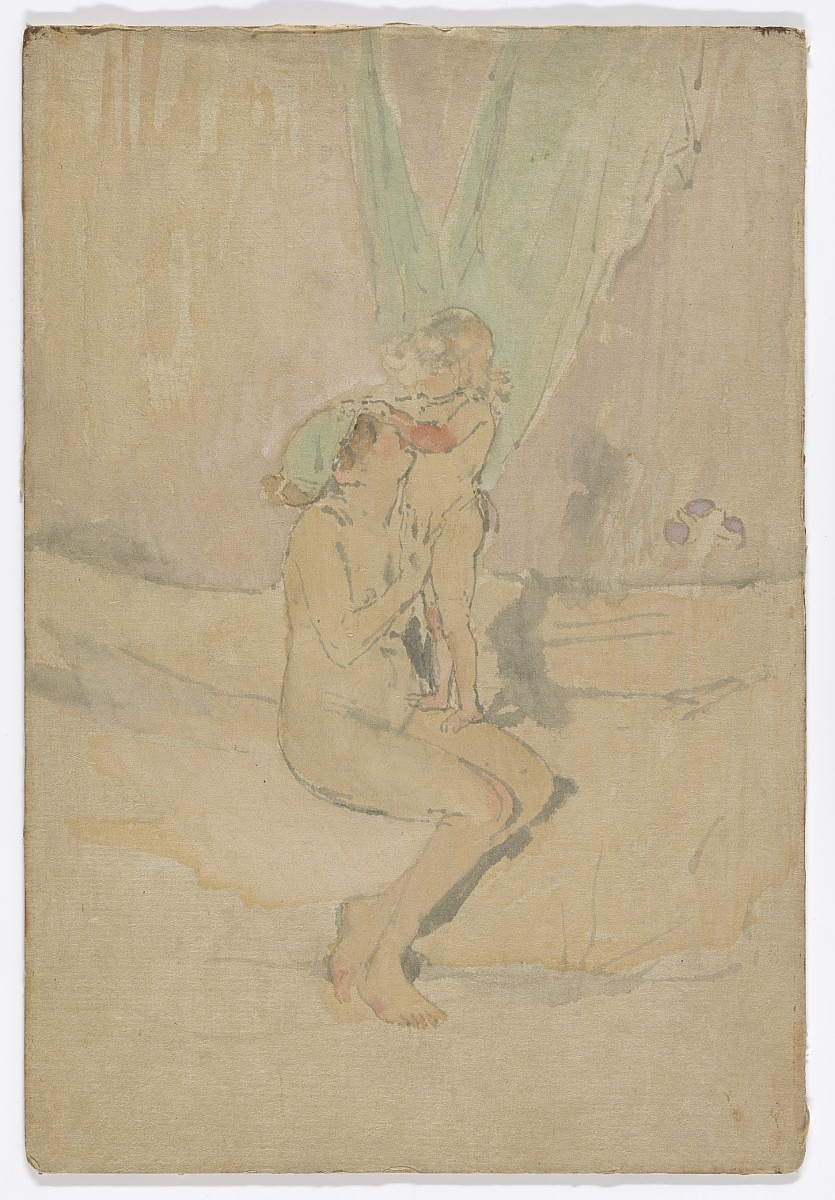 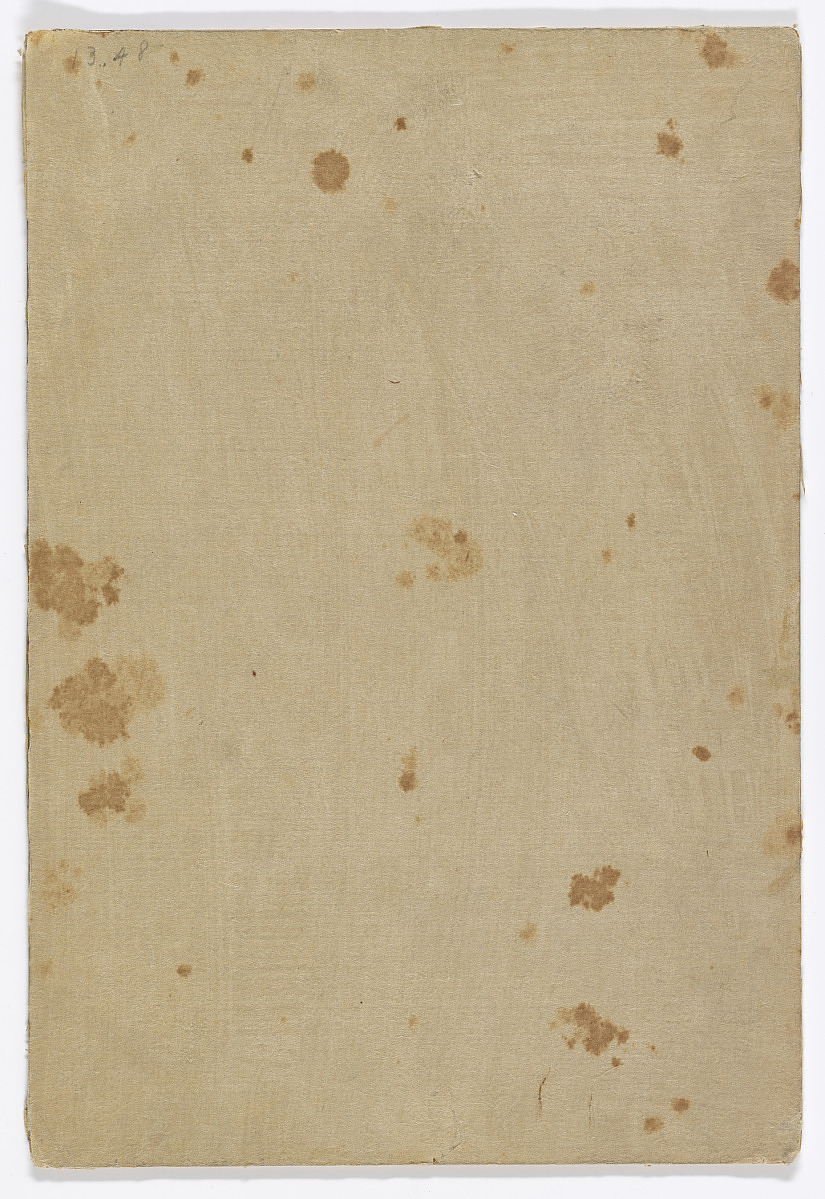 Nude figure in a blue cap, seated on a draped couch, with a nude child standing on her lap; signed with the butterfly at right.

1. Glazer, Jacobson, McCarthy, Roeder, wall label, 2019:
Whistler produced several watercolors in his studio in the 1890s. For Woman with a Child, he applied watercolor on Japanese paper. Since he routinely employed this kind of paper for his prints, Whistler knew the surface would not work well with watercolor. He chose to experiment with the imported paper nonetheless, perhaps to use up extra paper on hand in his studio.

2. Katherine Roeder, 2018:
This watercolor was first thought to be exhibited in St. Petersburg in 1897 as Woman with a Child (126); it assumed the Cupid moniker when it was exhibited in Paris in 1905 as Draped Figure and Cupid. It was acquired by Freer in 1913, and thereafter published as Nude Figure and Cupid up until 1984, when Curry gave it the current title. MacDonald writes, "Since 1905 the baby has been called 'Cupid,' but the title 'Venus' was only given recently, by Curry in 1984, who stated that this was 'one of Whistler's last treatments of this mythological theme.'" No mythological title was given by Whistler to [this painting] as far as is known, and it seems somewhat presumptuous to give it one. However, it has become accepted under that title. It may fit better into the "Mother and Child" series, which Whistler referred to as the "Rosies" from the model, Rose Pettigrew [see Rose Pettigrew embraced by a baby, Hunterian].

3. Kenneth Myers, wall label, 2002:
Whistler referred to the drawings of his model Rose Pettigrew as "Rosies." After seeing recent works by Renoir and Degas in a Paris gallery in 1891, Whistler admonished his wife, Beatrix, to take especially good care of "the beautiful Rosies" stored "in the little drawer on the sofa!!" "Take care of them Trixie-take the two drawers, just as they are, and carry them up stairs-dont let them be shaken, and cover them over with a little drapery and wait till I come back–We have no idea how precious they are!" Quotation from James McNeill Whistler's letter to Beatrix Whistler, June 1, 1891, Glasgow University Library.

Selected Published References
1. Curry: James McNeill Whistler at the Freer Gallery of Art, Pg. 206
Venus and Cupid is one of Whistler's last treatments of this mythological theme. The pink and blue color scheme was seen in his work of the 1860s and 1870s, which included several images of Venus. This watercolor is also related to numerous prints and drawings in the Freer collection. Here, Whistler chose an absorbent Japanese paper, which gives a softness to the lines that delineate the figures. He has arranged drapery behind the child to suggest large wings.

Save this image | Request Permission | Terms of use
Back to Top 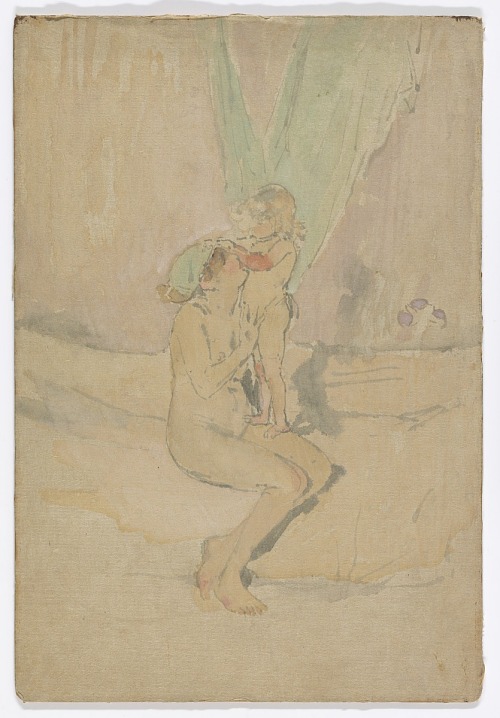