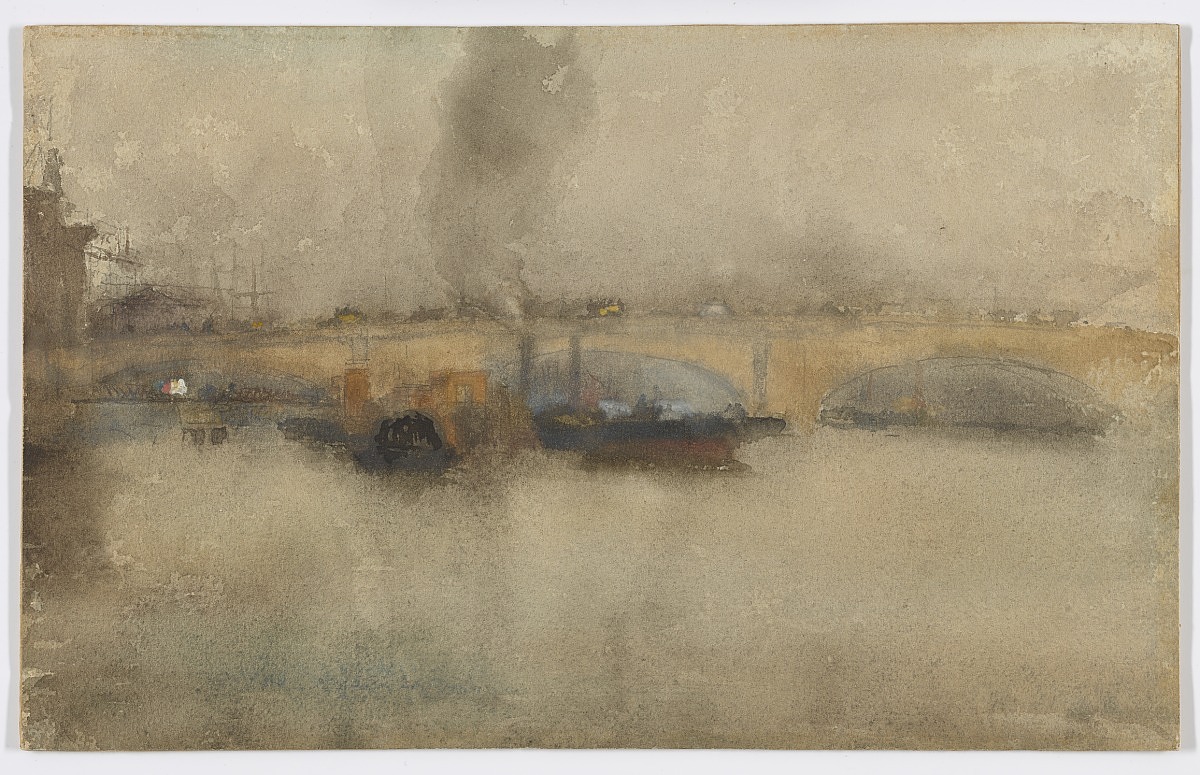 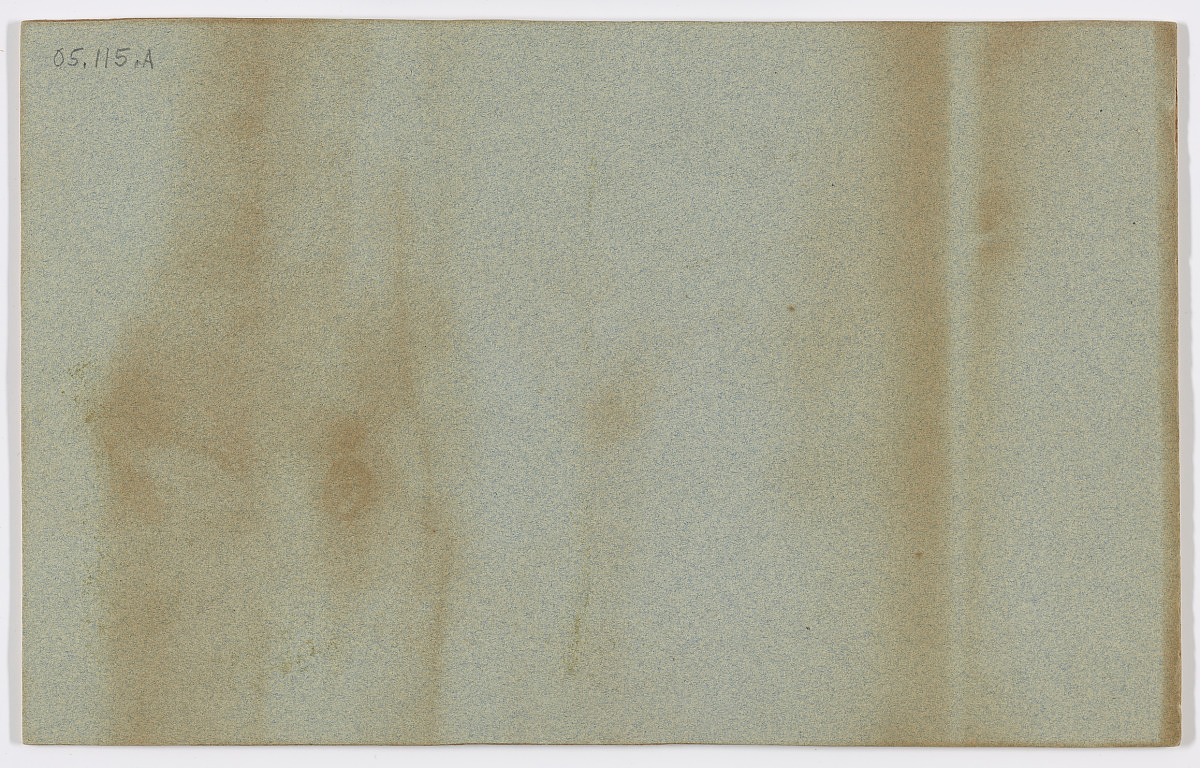 A view of the bridge, with river craft near it; masts beyond and to the left; unsigned.

Medium
Watercolor over graphite on paper

[1] See Original Whistler List, Paintings, pg. 20A, Freer Gallery of Art and Arthur M. Sackler Gallery Archives. Thomas Way Sr. and his son, Thomas Robert Way, were lithographers who worked closely with Whistler on several of his projects. They helped with the printing of his etchings, as well as the printing of Whistler’s promotional materials. Both Thomas Way Sr. and Thomas Robert Way owned many Whistler works. Thomas Way Sr. acquired several of these works at the time of Whistler’s bankruptcy, and he passed some of them on to his son (see The Correspondence of James McNeill Whistler, 1855-1903, ed. Margaret F. MacDonald, Patricia de Montfort and Nigel Thorp, On-line Edition, People, biographies of Thomas Way and Thomas Robert Way; http://www.whistler.arts.gla.ac.uk/correspondence).

Charles Lang Freer acquired many Whistler pieces from the Ways. However, museum records do not always specify whether it was the younger or elder Way who was the source of a particular object. Further, archival sources indicate that the junior Way sometimes acted on behalf of his father: whilst negotiating the sale of his own Whistler works to C.L. Freer, he would concurrently negotiate the sale of some of his father’s Whistler works to Freer. In cases where it is unclear whether it was the junior or senior Way who actually owned a piece acquired by C.L. Freer, the provenance record will simply state that the object was purchased from “Thomas Way Sr. or Thomas Robert Way.”

1. Glazer, Jacobson, McCarthy, Roeder, wall label, 2019:
"Mr. Whistler is about to surprise both his friends and his detractors by appearing in the new character of the watercolour artist," a reporter wrote in 1881. London Bridge was not Whistler's first watercolor, but he wanted it understood as his origin story. He sought to position himself as the heir to Britain's watercolor tradition and the preeminent artist of its future.

In technique, London Bridge was among the last watercolors in which Whistler employed underdrawing. It was also one of the last he created with cobalt blue paint. Shortly before traveling to the Channel Islands in 1881, Whistler purchased new watercolor materials and switched to cerulean blue paint, which was less expensive. He used cerulean blue in his seascapes, including Note in Blue and Opal–Jersey.

2. Lee Glazer, 2018:
Changed date from "early 1880s" to 1881. This painting was described in a newspaper article from 1881. According to MacDonald, on 23 September 1881 a newspaper reported, "His first water-colour drawing is Swan Pier and London Bridge from a low point."

1. Curry: James McNeill Whistler at the Freer Gallery of Art, Pg. 179
Whistler's decision to paint London Bridge in a glowing gray and gold palette recalls the expressive images of bridges on the Thames by J.M.W. Turner [The Thames above Waterloo Bridge, by J.M.W. Turner, Tate Gallery]. Turner's impact upon Whistler remains an issue still ripe for exploration. Whistler had copied Turner's work by 1855, and he probably viewed the exhibition of Turner's paintings at the National Gallery in London in 1857. However, standard biographies tell us that Whistler "reviled" Turner. Whistler complained that "neither Turner nor Ruskin had the brains to carry on tradition." Turner's art was championed by the art critic John Ruskin, who later became Whistler's adversary in the famous libel suit. This connection may well have something to do with the negative verbiage on Turner that Whistler left behind. However, some of Turner's titles, like Shade and Darkness or Light and Color seem to presage Whistler's aesthetic concerns, and watercolors like London Bridge offer visual evidence that Whistler did not revile Turner completely.

2. Untitled newspaper clipping, September 23, 1881
"His first water-colour drawing is Swan Pier and London Bridge from a low point of view, just above the pier–dull sky, Thames reflecting in it, dark smoke from boat beside the pier, mist through the arches, and vapour of multitudinous chimneys." 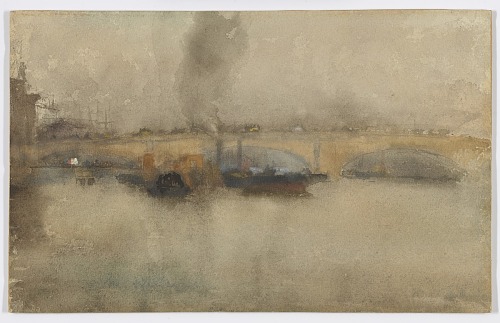