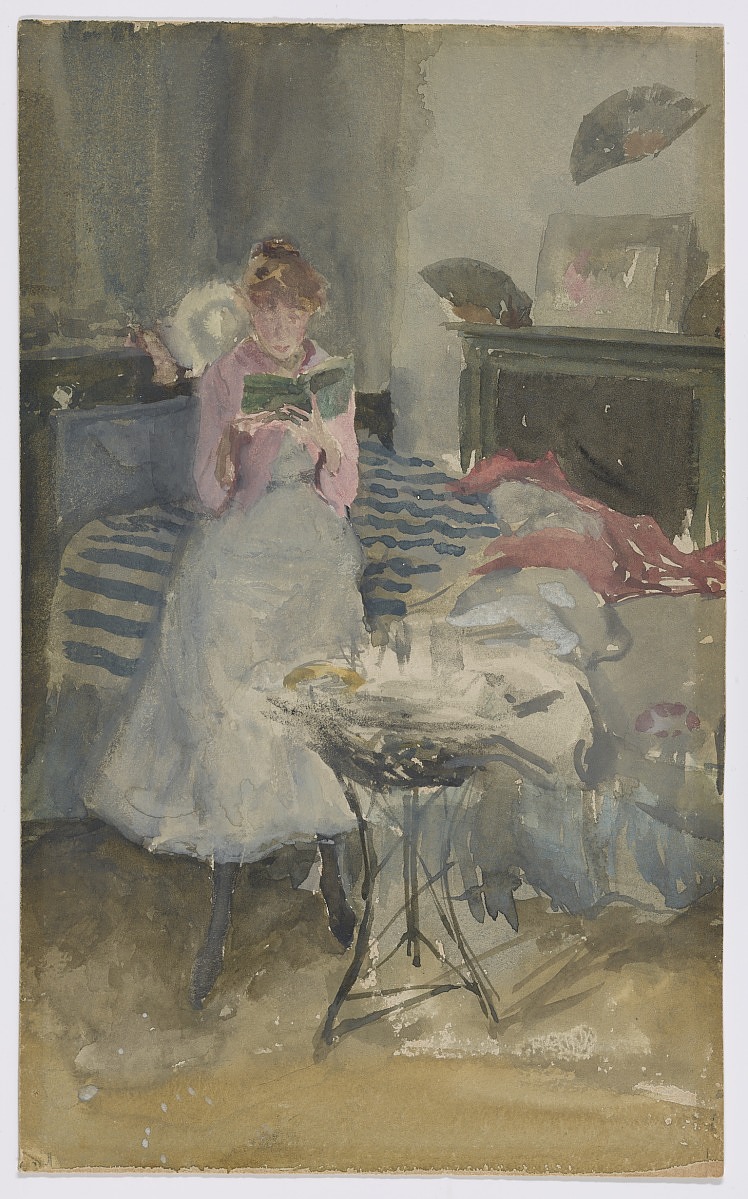 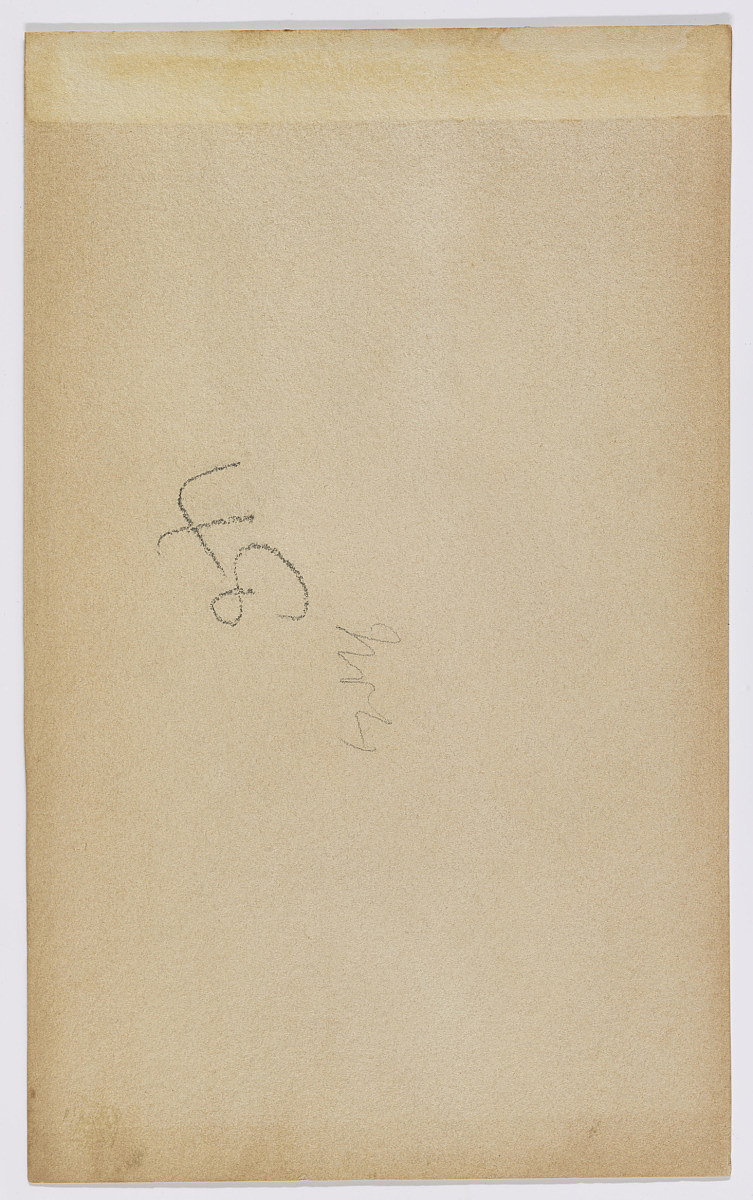 A girl seated on a bed, reading; signed with the butterfly at right edge on bedcover.

1. Glazer, Jacobson, McCarthy, Roeder, wall label, 2019:
Whistler's domestic interiors often convey a sense of intimacy or capture a private moment. An early work in this vein is Harmony in Green and Rose: The Music Room; (1860–61), an oil painting of his half-sister (playing a hidden piano), his niece, and a family friend. Twenty years later he returned to the theme in his watercolors.

He frequently depicted his model and longtime companion Maud Franklin, recognizable by her auburn hair, in quiet moments at home. Several compositions contain suggestions of an unseen person–perhaps the artist himself–by including a hat on the bed or an empty chair.

2. Susan Hobbs, 1978
The intimate, domestic setting and emphasis upon a flat, overall pattern in this watercolor suggests Whistler's affinity with contemporary developments in France, particularly the work of the Nabis.

1. Curry: James McNeill Whistler at the Freer Gallery of Art, Pg. 197
Whistler has constructed a taut and flat pictorial space whose bright colors and patterns predict the works of the Nabis in France at the end of the century. Once again the artist's mistress is placed in an intimate setting. Wearing a pink jacket, she sits on the edge of a rumpled bed, engrossed in her novel. Entwined with the bedsheets is a swath of pink fabric that looks suspiciously like a domino or evening cape. Whistler painted a portrait of the art critic Théodore Duret holding such a cape at about the same time that he executed this watercolor. Duret holds the cape over his arm with the proprietary air of a man waiting for his mistress. In the watercolor, another touch of pink appears in the painting that rests on the mantelpiece. Surrounded by fans, the prominently displayed painting serves to remind the viewer that this is an artistic household. The color pink is used to suggest a link between the woman reading and the absent artist. Common plots in French novels of the period involved the relationships between young painters and their mistresses.

2. Standard, May 19, 1884
"a grisette reading a French novel" and "[The color...is very good]...a delightful devourer of penny sentimentals is seen reading upon a bed."

3. The Builder, May 24, 1884
"A good many contain figures of young girls reading, lounging, in various attitudes, their dresses and surroundings giving the colour combination which is denominated 'Pink Note' (N.B. Not a billet-doux, but a 'note' in the scale of colour), or 'Harmony in Violet and Amber' [no. 19]. These figures are very slightly sketched, and their faces will certainly not bear looking close at; but they nearly all have character in pose, and show that there is good drawing underlying their shadowy similitude; one in particular, 'Yellow and Grey' 9430, a girl standing before a background of yellow, is charming in attitude and in the masterly indication of the figure."

4. "Mr. Whistler's Exhibition," Graphic, May 24, 1884
"Mr. Whistler['s]...recent studies and sketches...are varied in subject, and differ from each other very widely in merit. The majority are of the slightest kind, mere memoranda of effects of light and colour, such as other artists retain in their studios for reference. A few of these, vague as they are, and without any definition of form, are charming by reason of their subtle beauty of colour and suggestiveness. 'The Nouvelette,' in which the figure of a lady reading in bed is faintly indicated, the figure of a girl seen through a doorway 'Shelling Peas' [no. 20], and the interior called 'Violet and Red' [no. 6 or no. 10], are among the best of these very slight watercolour sketches."

5. Kensington News, May 29, 1884
"The colour in 'Erith–Evening' (14) is very good. So is it in (16), 'Pink note–The Nouvelette' in which, however, a delighted devourer of penny sentimentalities is seen reading upon a bed. Of course to develop strange penchants." 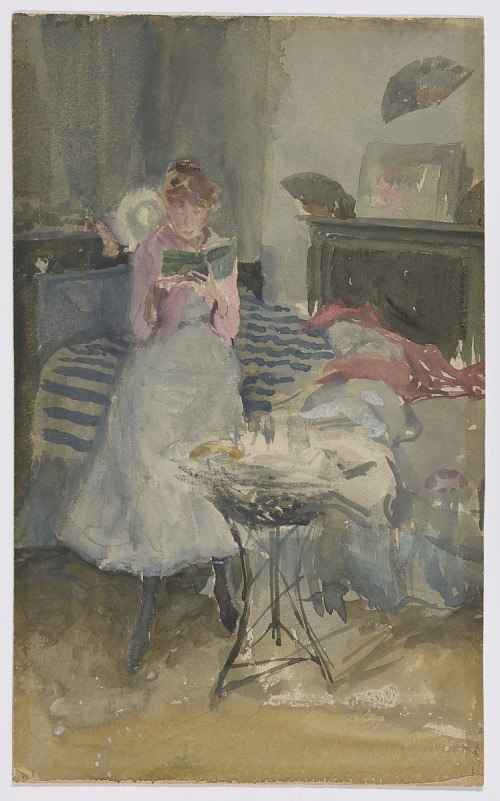