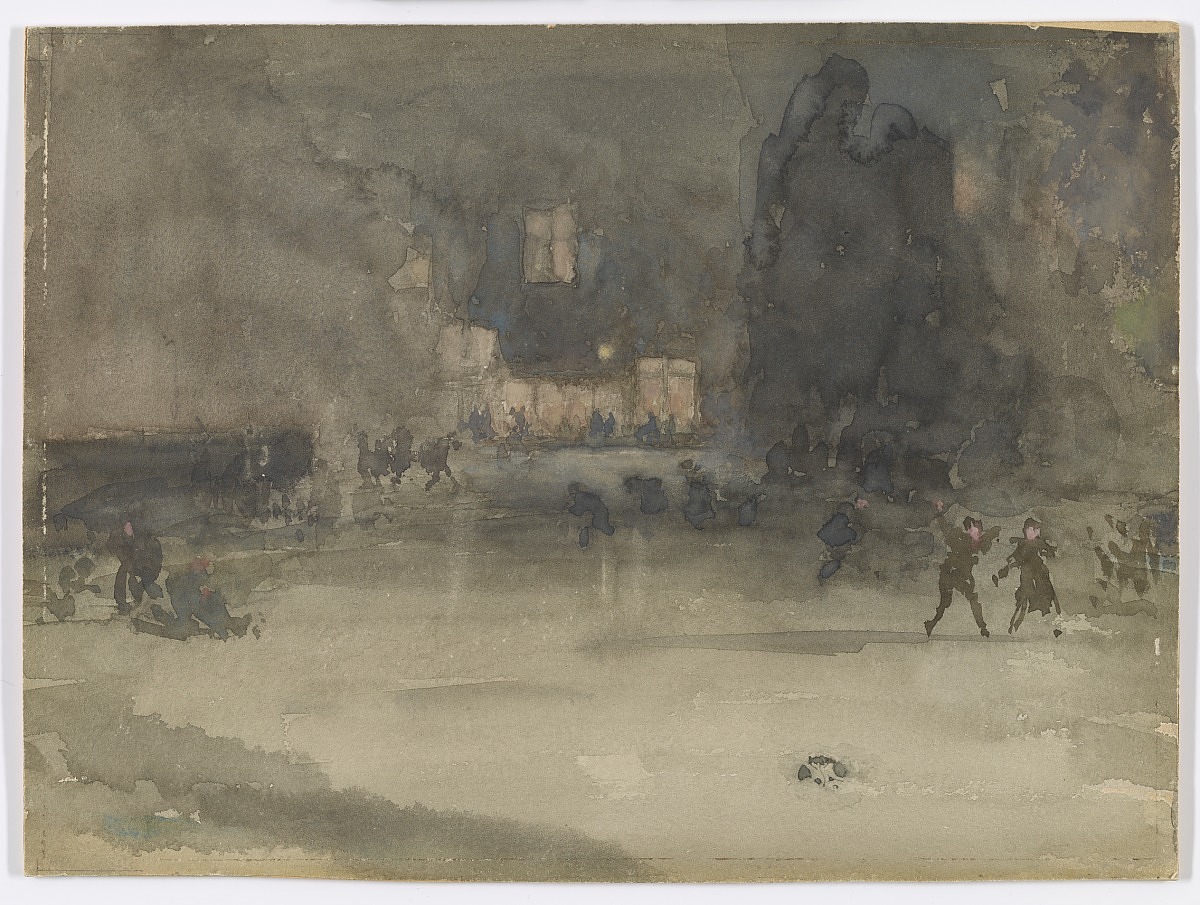 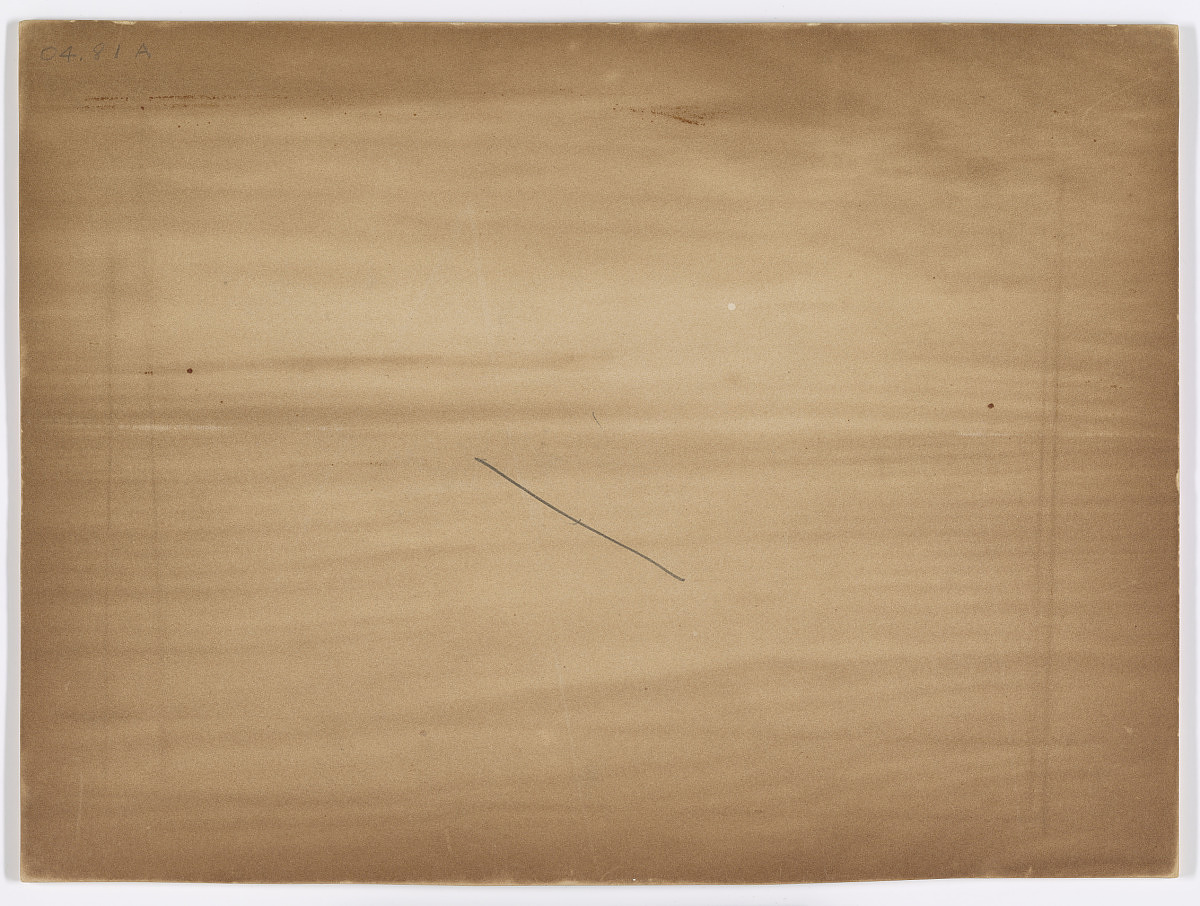 A nocturnal view of Amsterdam in winter with figures skating in the center and foreground, and a building and trees indicated in distance; signed with the butterfly at lower right.

1. Glazer, Jacobson, McCarthy, Roeder, wall label, 2019:
Whistler explained that he chose the word "nocturne" to describe his night scenes precisely because "it generalizes and simplifies the whole set of them." Despite their differences in scale, location, subject matter, and medium, all of his Nocturnes essentially focus on complicated patterns of color and tone. The four watercolors that resulted from his 1882 trip to Amsterdam are among his most experimental works. Maintaining a wet surface while he worked, the artist rubbed and scraped the paper to achieve his desired effects, much as he did to the surface of his oil Nocturnes. Studying the paper under magnification reveals abraded fibers and confirms Whistler's technique.

1. Curry: James McNeill Whistler at the Freer Gallery of Art, Pg. 191
The "Amsterdam Nocturnes" immediately bring to mind Whistler's series on Cremorne Gardens, executed in oil during the previous decade. These four watercolors bear strong compositional affinities to the earlier group. Once again, large blocks of murky color create abstract patterns broken by scattered sources of light and occasionally punctuated by dimly perceived figures. Margaret MacDonald has called these "the most extreme of his watercolors," pointing out that the artist "almost entirely rejects the qualities of the paper itself, and deluges it with wash over wash of dark colours to obtain effects nearly impossible to realise." The views of Amsterdam and Cremorne could be related by subject matter as well. The most active scene, Amsterdam in Winter (F1904.81), recalls public pleasures at Cremorne, for it depicts an urban crowd at leisure. This time the crowd is skating rather than dancing, but Whistler generates a sense of abandon through both the agitated, ominous atmosphere and the indecorous postures of the skaters. Black and Red: Back Canal, Holland (F1902.159), includes two figures, one clad in black, the other in white, probably a couple on the order of the one furtively leaving the London pleasure garden in Nocturne: Cremorne No. 3. Figures walking along the quays in Grand Canal (F1902.161) and Grey and Gold (F1902.160) are shrouded in the anonymity afforded by the fog and the night. An etching titled Nocturne: Dance-House [The Dance House: Nocturne, 1889, F1906.117] is clearly related to the Amsterdam watercolors and helps to substantiate this analogy with the Cremorne series. Although Whistler chose typical tourist views for some of his daylight etchings of the Dutch city, night seems to have found him once again the discreet observer of slightly unsavory scenes from modern life.

2. Life (?), May 22, 1884
"There was one picture which really frightened me. It is called a 'nocturne in black and gold–Winter: Amsterdam.' An awful thing is rising out of space on the left, the sort of genius which came out of the stone bottle in the Arabian Nights, and the inhabitants are flying terror-stricken in all directions." 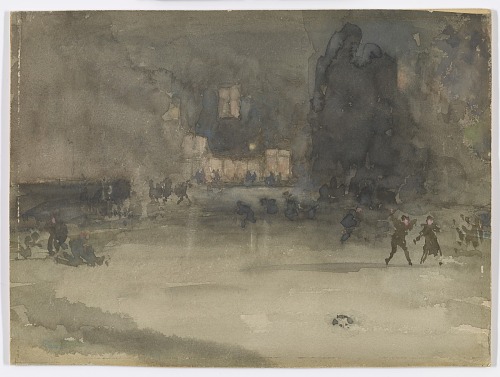