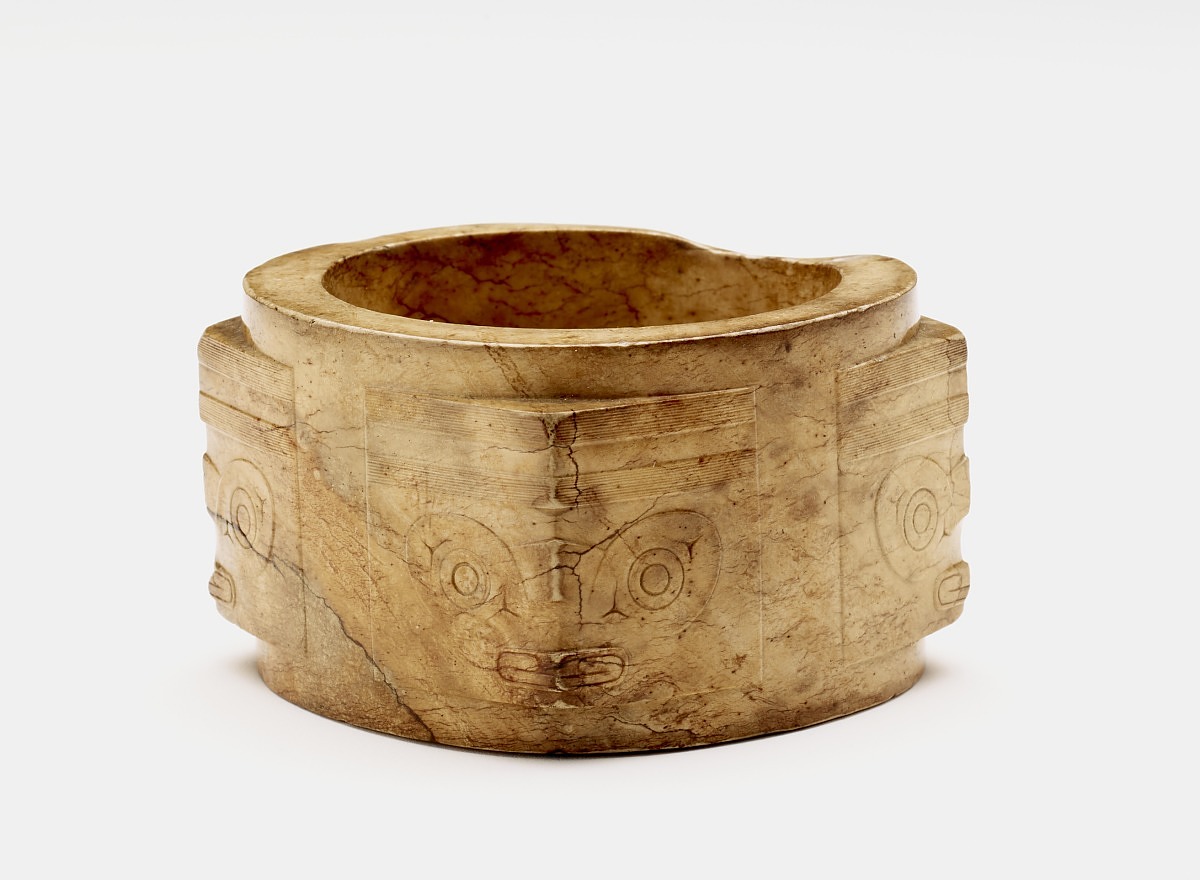 This example is outstanding in its silky-smooth finish and fine details. The opaque ivory color was probably caused by the intense heat of a funerary pyre, which played an important part in Neolithic burial customs.

These jade cong 琮 tubes with a square cross-section bored with a central hole are now considered an innovation of the Liangzhu 良渚 culture. Cong 琮 come in a great variety of sizes and are frequently found in Liangzhu 良渚 tombs, sometimes arranged with other jades in a circle around the body. The original meaning and function of these ritual forms remain unknown. Many of the earliest and most carefully finished examples (the result of months of laborious shaping by hand) are comparatively compact; their rounded shapes suggest the form evolved from bracelets. On two of the cong 琮 here (F1916.118, F1917.384), the haunting mask design—with its bar-shaped mouth, raised oval eyes, sunken round pupils, and two bands that might indicate a headdress—resembles the motif seen on Liangzhu 良渚 jewelry.

Much larger cong 琮, which are frequently made of lower-quality nephrite, emphasize impressive scale over meticulous workmanship. They have flatter sides, sharply angled corners, and squared collars at top and bottom—all indications that less time and attention were paid in shaping a rectangular block of jade. Simplified mask motifs on these cong 琮 would have been easier to produce as well. Such shifts might be associated with changing attitudes towards ritual objects that were intended for burial.

The cong 琮 form continued in use long after the Liangzhu 良渚 culture flourished, but later Neolithic and Bronze Age examples (such as F1917.41, F1919.51) are typically smaller and undecorated, suggesting their diminished importance in burial rituals.

Museum founder Charles Lang Freer acquired these cong 琮 largely for their aesthetic appeal: he simply liked the way they look. Freer was attracted to their intriguing shapes, smooth surfaces, and mottled colors. A century ago, when these cong 琮 appeared on the international art market, little was known about their historical, cultural, or archaeological significance. Today these mysterious tubes, along with most of the other objects in this room, are recognized as being among the most important jades from the Liangzhu 良渚 culture now outside China.

What Was It For?
An innovation of the Liangzhu culture, these jade cong (pronounced tsung) tubes are the result of months of laborious shaping by hand. Various sizes are found in Liangzhu tombs, sometimes arranged with other jades in a circle around the body. While their original meaning and function remain unknown, the circular shape of many early examples suggests the form evolved from bracelets. Look for a haunting mask design, with a bar-shaped mouth, raised oval eyes, and sunken round pupils.

This example shows the classic shape of a cong 琮--a central cylinder with projections that form four distinct corners, the cylinder rising above the corners as a low collar. Its walls taper almost imperceptibly from top to bottom. The corners project as a single triangular unit, overlaid onto the curved walls of the cylinder and meeting at an obtuse angle to give its cross-section a slightly swollen appearance. Each unit shows the same animal-face design with oval eyes, bridge, and nose in low relief. Double circles, drilled with a hollow tool and bracketed by Y-shaped corners form the pupils. Above the eyes, hairline thin incised parallel lines fill two horizontal bands, suggesting some kind of headdress. The warm golden hue that covers its entire surface is probably the result of prolonged handling.

A virtually identical example has been excavated from Tomb 7 at Yuhang 餘杭 Yaoshan 瑤山, Zhejiang 浙江 province, a grave that contained a rich assortment of elaborately decorated jade ornaments.[1] The Yaoshan 瑤山 example was made from a fine-grained, opaque ivory-white material that might represent the original color of the Freer example before extensive handling caused it to discolor. Unlike cong 琮 F1917.384, where the handling also wore down much of the fine surface design, this bracelet has retained the original quality of the superbly refined workmanship that marks the best of Liangzhu 良渚 jades.

Among excavated examples, singled-tiered cong 琮 bracelets are significantly fewer in number than multi-tiered ones. A small number are cylindrical or near cylindrical with oval-eyed animal faces (see also F1917.384). [2] Most others show human faces with circular eyes, often depicted wearing some sort of ornamental headband (see F1919.47).[3] On two-tiered versions, the round-eyed human face often superposed the oval-eyed animal face, so that there is a clear distinction in identity between the two images, implying different roles or meaning. 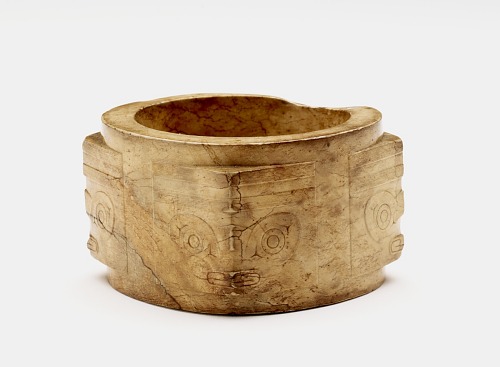